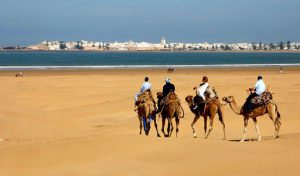 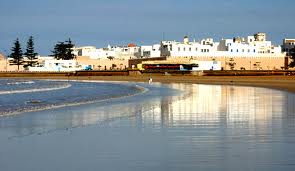 Registered as a World Heritage Site by Unesco since 2001, Essaouira is a good place to live.

The multi-confessional harmony between Jews, Arabs and Christians leaves us pondering. There is a special atmosphere, marine, serene, authentic, without red light, almost entirely pedestrian where time seems to have suspended its flight.

Essaouira has the secret to appease, to reconcile man with himself. It was in 1956 that MOGADOR was baptized “well guarded”, in ESSAOUIRA “the well-designed” one finds there the place Moulay El Hassan, its numerous cafes, the perspective of the streets, the blue and white houses, Stalls, local crafts. It is a town of artists in marquetry, and in painting. We taste fresh grilled fish in the gargotes of the harbor.

The other symbol of the city, its beach, a magnificent bay as far as the eye can see for several kilometers on the coast from the port, where you will see the island of Mogador, a protected bird reserve.

This beautiful beach has obtained the eco-label “blue flag” for the cleanliness of its beaches.

The wind “Les Alizés” another symbol of Essaouira, which is the delight of lovers of the slide, surfing, windsurfing or kitesurfing they will find there WAVE with a temperate climate year-round.

Essaouira will not leave you indifferent, this city federates all the sensibilities.

It is at the same time ancestral Morocco, a synthesis of its history, a place where one finds oneself without renouncing his personality, or one wants to put down his bags, for a night, for a life.

The medina of Essaouira was founded by Sultan Sidi Mohammed Ben Abdellah in 1765, the urban plan was entrusted to the French architect Théodore Cornut … For further information: www.mogador-essaouira.com